How to choose the best Fins

The basic purpose of a pair of fins is to move you through the water much more efficiently than if we were just flapping our arms and legs around which are pretty much useless once you have added bulky equipment and drag into the equation. You might think that one set of fins is the same as another set but there are actually a number of different styles and technologies at work. On top of that different types of diving can favour a certain style of fin because it is better suited for the environment.

If you are in the market for a new pair of fins but are not sure how each type of fin differs then this scuba diving fin guide will help to explain the different blade technologies and look at some of the features available.

The Anatomy of a Dive Fin 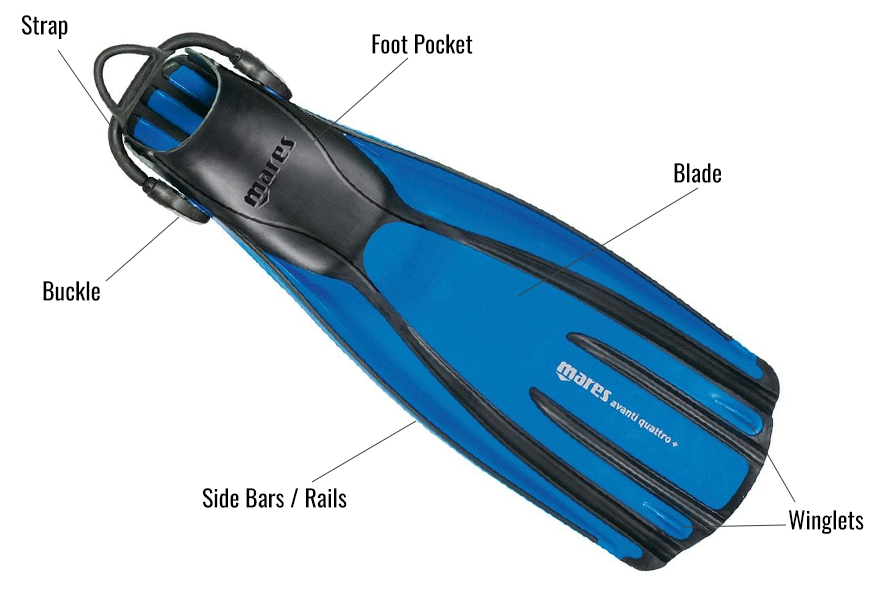 The first decision you'll need to make is whether you want a pair of fins with an open heel or a full foot pocket. For most diving, you'll need an open heel pocket that can accommodate neoprene and drysuit boots as well as being heavier and stiffer to provide better propulsion for a bulky dive kit. Full foot fins are significantly lighter, make great pool fins or if you are diving somewhere nice and hot where you'll be diving with bare feet or with just a pair of fin socks.

If you go for an open heel fin you'll come across a variety of fin strap types ranging from a basic adjustable rubber strap to stretchy spring or bungee straps. The basic strap is simply loosened to allow it to fit over the heel and then pulled tight to secure the foot in the pocket.

There are variants including expanding buckles that all the strap tightness to be set and then expanding sections released for donning and doffing before securing back in place to tighten.

The most common type of straps found on high-end fins is spring or bungee straps that are very quick and easy to fit by simply pulling the strap over the heel. The spring or elasticity of the strap then provides a comfortable pull to keep your foot in the pocket.

Most fins can be upgraded from a rubber adjustable strap to a spring or bungee strap by either fitting a manufacturer-specific kit or a universal strap kit.

From this point, onward fin design can vary greatly from a simple paddle-style fin to hinging designs that are designed to angle the blade for optimal thrust. There are generally a couple of standardised elements of the blade though.

The sidebars or rails that run the length of the fin are what gives the blade its strength, preventing the blade from just flopping around and giving it a carefully calculated bending profile.

The other little features that crop up on a lot of fins are winglets. They perform the same function as on aeroplanes, helping to reduce drag as water is pushed over and along the blade.

This is the simplest blade type that uses a single material blade between the sidebars that may or may not feature winglets are raised bars that run the length of the blade to help control the water down the blade. This style of the fin is often the most cost-effective but will usually perform poorly compared to other styles.

The Channel blade builds upon the paddle blade by using at least one more material within the blade that is more flexible to create panels. These flexible panels allow the blade to transform into a U shape during the kick cycle, effectively cupping the water and channelling it down the blade in a very controlled manner. The rigid panels within the blade prevent it from over flexing and maintaining its shape.

Split fins tend to be more expensive but can offer one of the most comfortable and energy-efficient kicking cycles out of all the blade types. The blade draws upon principles that nature has been using for a really long time within birds wings and is similar to how plane wings work.

The theory is that high pressure is created on one side and low pressure on the other, effectively pushing the diver through the water. In practice split, fins offer a lighter kick that needs less force and stress on the ankle.

Hinge or Pivot fins can combine any of the above blade designs but what sets them apart is the hinging point just below the foot pocket that alters the blade angle of attack to maximise thrust whilst reducing the stress and strain felt through the ankle. Some designs use a special rail that allows the blade to bend to a maximum angle whilst some use a pivot and bungee system.

Vents are quite common on fins are quite often seen just below the foot pocket where there is little water flow over the fin. Without a vent, you end up just trying to push the water around without is created any propulsion for you. The vent allows this water to pass through the blade, reducing effort and drag on the fin.

Foot pockets have a tendency of sealing around your boot or foot during use which is fine whilst you are diving but breaking the seal and vacuum behind it when taking your fins off can be difficult. By perforating or venting the foot pocket air and water can get in around the foot to prevent that seal and vacuum from forming.

As an additional bonus, it can also help to reduce the parachute effect of water flowing into the foot pocket and reducing efficiency.

Was this article helpful?
Yes
No